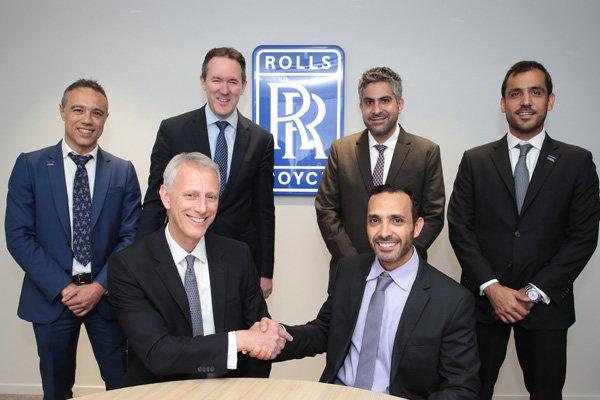 Sanad Aerotech is a leading maintenance, repair and overhaul (MRO) provider for aero engines and industrial gas turbines that is wholly owned by Mubadala Investment Company.

The agreement will see Sanad Aerotech provide complete overhaul services for Trent 700 engines - including component repair - to operators globally, over a nine-year period (2019-2027), said a statement from the company.

Sanad Aerotech will, under this agreement, more than triple the number of Trent 700 engines it services annually - from the current 22 to 75. This represents 25 per cent of the global Trent 700 engine maintenance conducted annually, which will cement the company’s global position as the leading Trent 700 MRO service provider, it said.

“The magnitude of this agreement will benefit the UAE economy greatly over the coming nine years and reinforce Abu Dhabi’s position as a leading global aerospace hub,” he said.

The Abu Dhabi-based MRO has overhauled over 90 Trent 700 engines to date. With this new agreement, this number will increase to more than 600 over the contract period. To meet the increased load, the MRO is growing its workforce by more than 40 per cent to almost 500 aircraft engineers and technicians.

Janahi added: “This agreement involves an upscaling of our capacities for Trent 700, benefiting both Rolls-Royce and other existing customers through access to world-class capabilities and a highly-skilled multinational workforce that overhaul engines to the highest quality.”

“This landmark agreement also introduces healthy competition into the overhaul marketplace and is testament to our track record of quality, safety and timely delivery which Sanad Aerotech has consistently demonstrated since 2013 when we first started the overhaul of Trent 700 engines,” he concluded.

The addition of Sanad Aerotech supports the growth of Rolls-Royce’s maintenance capacity and also supports its wider services strategy to develop an increasingly capable, competitive and flexible CareNetwork, it added.

“As our family of Trent engines continues to grow, we are expanding our services network and continually reducing engine maintenance turnaround times, so airlines can keep passengers flying,” he said.

“Sanad Aerotech has a proven track record in working with the Trent 700, and will be a valuable addition to our network,” he added.

Sanad Aerotech’s 330+ strong workforce, of over 30 different nationalities, will carry out the Trent 700 maintenance in the UAE at the MRO’s state-of-the-art facilities at Abu Dhabi International Airport, it stated. – TradeArabia News Service