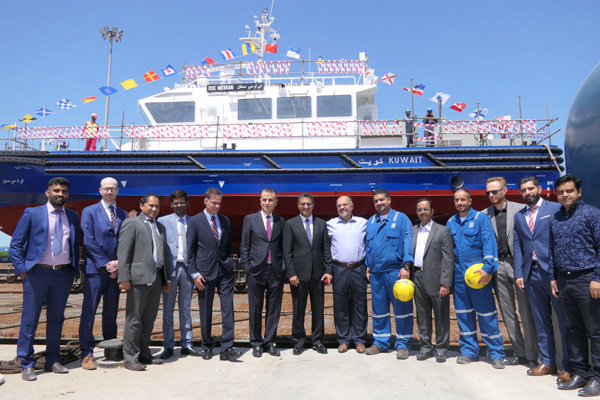 As per a contract signed in May 2017, the “Meskan” is the final boat of 10 -- four crew transport boats and six pilot boats – that Grandweld was required to build for KOC’s fleet, said a statement.

With this launch, the total number of six deliverable pilot boats has been completed. Moreover, the remaining four boats that were already launched earlier, will be delivered in June after full inspection and testing for sailing performance, it said.

The new “Meskan” boat, which was specifically designed to meet the needs of KOC, was launched ahead of schedule as per the contract between Grandweld and KOC.

In accordance with the classification standards of Lloyd's Register, “Meskan” will provide high operational efficiency and elite safety.

Jamal Abki, general manager of Grandweld Shipyards said: “Through great proficiency, we have completed the building of KOC’s 10 boats before the specified deadline and it is with great pleasure that we are here today inaugurating the ‘Meskan’.”

“We are proud to once again demonstrate our first-tier time management and control of project workflow to meet deadlines promptly, if not ahead of schedule. While violation of scheduled deadlines and specification changes seems to be a common market practice, we are dedicated to avoiding this trend,” he said.

Abki continued: “Ensuring our clients’ utmost satisfaction and safeguarding their business opportunities are our top priorities. Despite the fact, that the agreed upon contract stipulated a speed of 22 knots for ‘Meskan’, we have exceeded project specifications by designing and building it to reach a speed of up to 24 knots.”

“This significant achievement was delivered by our engineers, and construction and design experts, without increasing client cost or requesting amendment of schedule or postponement of project delivery. This is yet another quality which distinguishes us from our competition in the shipbuilding market, as we guarantee our customers a higher return on their investments and better economic value operationally. With that said, this makes us feel eligible to tag our products with the ‘Made in UAE brand’,” he added.

Sami Al Sawagh, marine operations manager at KOC, said: “The launch of these vessels comes at a very opportune time for KOC, as our operations have expanded exponentially.”

“The high level of satisfaction and positive feedback we have received from our crews about these boats, played a major role in contributing to our decision to choose Grandweld for these builds. In addition to their optimal performance efficiency, low consumption of fuel, and environmentally-friendly footprint, these factors only further supported our choice,” he added.

Al Sawagh continued: “During the entire duration of this project, not once did we feel that our relationship with Grandweld was based on supplier/client interaction. In fact, it was 100 per cent based on partnership.”

“Our technical teams contributed with a hands-on-approach during all phases of the boat’s construction, starting with design and specification until the actual build and completion itself. This led to full participation of management on the project and the follow-up stages of construction. By relying on our internal team to manage the project, they exceeded all expectations and we are proud to have formed this partnership,” he added.

“Meskan” is considered remarkable in build, combining both steel and aluminium in the structure of the hull to achieve greater stability in sailing, and ensuring optimal safety. Additionally, the high quality materials used to manufacture the boat, hailing from the United States, Europe and Japan, offer strong manoeuvrability. Boasting a maximum speed of up to 24 knots, the boat has a sailing range that reaches up to 250 nautical miles.

Designed to withstand the most challenging weather conditions, “Meskan” is capable of connecting marine crews and assisting ships to dock around the clock. The high performance capability of the boat can be attributed to its distinctive design, which has been modified several times after practical tests of a number of pilot models in water. Furthermore, it is able to work on coastal ports or offshore berths, which Kuwait owns four of. – TradeArabia News Service