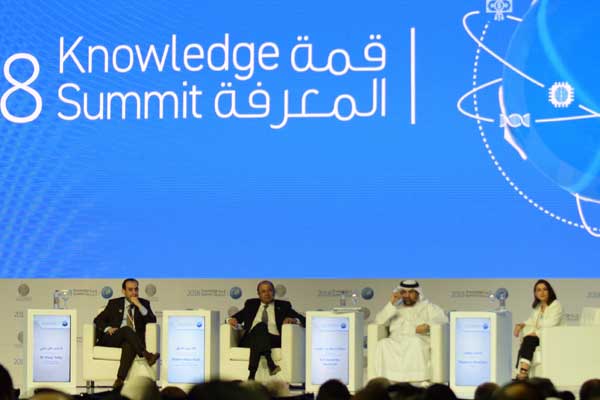 He was speaking on the second day of the fifth annual Knowledge Summit, organised by the Mohammed bin Rashid Al Maktoum Knowledge Foundation (MBRF). The session was dedicated to the 2018 edition of the Global Knowledge Index (GKI), launched the previous day.

The summit was held on December 5 and 6, at the Dubai World Trade Center, in Dubai, UAE.

Abdel Shafi said: “As we strive to achieve the 2030 Agenda for Sustainable Development, knowledge is our strong ally.”

“Its application develops capabilities and expands opportunities in multiple sectors of our lives, from education to economy to technology,” he added.

In his speech, Huwaireb declared that the knowledge summit has changed a lot of concepts in the past years and helped enhancing knowledge in its different shapes, announcing that “The 2018 edition of the Global Knowledge Index is a testimony of our efforts in paving the way for pioneering projects and initiatives that catalyse our societies’ effort towards producing, disseminating and localising knowledge in the world.”

He added that under the umbrella of the partnership between UNDP and MBRF and within the Knowledge for All project, significant success was achieved over the years that led to expanding the scope of work to cover 134 countries in the 2018 edition of GKI.

Torky noted: “Data can help the Arab region speed up development in the right direction, embracing the technology of the future, where the Global Knowledge Index also plays an important role in encouraging the countries to make their data available.”

He also highlighted the critical role played by different educational sectors and its effect on the other sectors, namely innovation, technology and economy.

“This project shows the keenness of the UAE leadership and people to keep up with scientific development in preparation for the future,” Torky added.

The summit also highlighted UNDP and MBRF’s latest achievements in producing the world’s first Future of Knowledge: A Foresight Report, which is a pilot study on the future fields of knowledge that will shape the transformation of knowledge societies.

On the sidelines of this year’s event, the two-day summit also announced the winners of Literacy Challenge in the Arab World, an initiative to curb illiteracy in the region.

The summit also hosted several informative sessions led by Knowledge for All project in the Knowledge Factory Arena including “Efficiency of Educational Systems and Youth Effectiveness,” it focused on the economic challenges to technical education and vocational training around the world.

While “The Economic Return of Higher Education, Research, Development and Innovation” session discussed the efficiency of the higher education system and different performances of research and innovation around the world.

The last session in the Knowledge factory arena titled “Information and Data” discussed the role of data as the solution to help governments in making policies and future economic strategies. The panel also discussed the issues related to data privacy and data science in the service of humanity.

Organised by the Mohammed bin Rashid Al Maktoum Knowledge Foundation (MBRF), the fifth Knowledge Summit was held on December 5 and 6 at the Dubai World Trade Centre.

The summit bore the theme “Youth and the Future of the Knowledge Economy” and tackled the topic of the knowledge economy in depth.

The summit 2018 brought together over 100 speakers including experts, decision makers and stakeholders from around the world in more than 45 discussion panels.