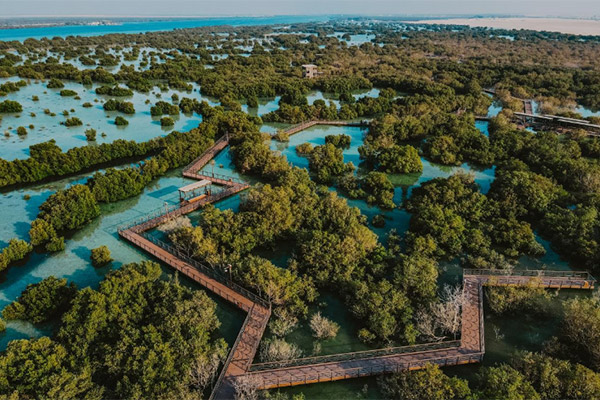 Abu Dhabi-based Jubail Island Investment Company today (January 17) announced that it will support the UAE’s efforts to expand mangrove forest cover in the emirate by planting one million mangrove trees on the island within the next 10 years.

To date, 350,000 new seedlings have already been planted on Jubail Island and over the next decade, a total of 1,000,000 additional new mangroves will be planted in support of the country’s ambition to plant 100 million mangroves by 2030; representing an increase from 30 million, which was announced during this month’s COP26 Conference in Glasgow.

The announcement by JIIC reaffirms its ongoing efforts to promote socially and environmentally responsible development, in addition to actively implementing programs to protect and enhance the island’s biodiversity. The new mangrove initiative will allow the introduction of new water channels to increase natural tidal flow conveyance into the surrounding wetland areas.

Ponds, labelled as ‘Biodiversity Genesis Zones’, have also been created within the new channel system and will improve the flushing of the channels to enhance the overall water quality within the wetland system. These new littoral zones have been shaped adjacent to existing areas of the mangrove forest and saltmarsh and will also create additional habitat for native species.

In addition to the 350,000 seedlings already planted, Jubail Island has partnered with Etihad Airways to plant another 182,000 mangrove trees in the next five years at Jubail Island.

Mounir Haidar, Managing Director of Jubail Island Investment Company, said: “We extend our sincere thanks to the Environment Agency – Abu Dhabi for their continued support and guidance throughout our environmental initiatives, and for their strenuous efforts to work with partners with the common goal of protecting biodiversity and preserving the quality of life in the UAE for a sustainable future.”

“At Jubail Island Investment Company, we are determined to develop Jubail into a prominent landmark destination that sets the standard for community development which will protect the natural environment and preserve the flora and wildlife that inhabits the island.

“Mangrove forests are an important part of the UAE’s natural assets, providing a haven for wildlife while also helping to reduce overall carbon emissions, releasing oxygen and reducing erosion and pollution in our waterways and coasts.

“It is only right that we support the UAE’s forward-thinking initiative by planting 1 million mangrove trees over the course of 10 years right here within Jubail Island. This planting initiative will further enhance Jubail Island position as a hub of ecotourism in Abu Dhabi as well as being an integral element of our overall landscaping plan for the island, which will be home to more than 10,000 residents when completed in late 2023,” Haidar added.

Nestled among the breath-taking natural beauty and rich biodiversity of the mangroves, and covering more than 2800 hectares, Jubail Island is perfectly situated between Yas Island and Saadiyat Island, and will become Abu Dhabi’s leading sanctuary designed to appeal to wellness and nature enthusiasts. – TradeArabia News Service