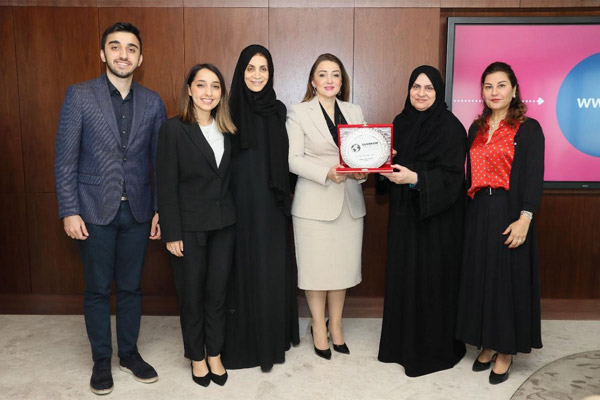 Such visits contributed in the growth of its international relations networks, the formation of new successful cooperative partnerships, and the exchange of experiences.

Dr Raja Easa Al Gurg, President of the Dubai Business Women Council (DBWC), stated that the council is a strategic link between women’s business communities around the world and the representative of the Emirate of Dubai and its vital, diverse, and balanced business environment. She added that Dubai is considered a global model for empowering women in the workplace and strengthening their competitive roles in both the business and economic realms.

Al Gurg further highlighted that DBWC has had numerous strong international relations networks with many global marketplaces for over 20 years. Such relationships are used to form future partnerships as well as unlimited initiatives and programs.

The visiting delegates represented a diverse range of ethnicities and cultures, with the majority hailing from Turkey, France, Mexico, Estonia, Serbia, Canada, and Brazil.

Nezaket Emine Atasoy, President of the International Investment and Business Confederation (Uluskon), which consists of 18 Federations of Businesswomen and 24 Federations of Businessmen, was one of the most significant delegates. Uluskon is a non-governmental organization with representatives in all 81 cities of Turkey and in 100 countries all over the world. The business landscape in the UAE and Turkey as well as collaboration opportunities were discussed during the meeting.

DBWC received a delegation of Brazilian women from the "Virada Feminina" Foundation, a Brazilian organization dedicated to women's empowerment and community betterment, and an Estonian delegation representing the "ÄND" Foundation, which promotes and brings together women and entrepreneurs from many industries.

The Council also hosted a high-level Canadian tech delegation of businesswomen and entrepreneurs led by HE Marcy Grossman, Ambassador of Canada to the UAE. The visiting delegation included six Canadian companies specializing in modern and digital technologies and was headed by official women and entrepreneurs. The visiting delegates and the members of the DBWC discussed opportunities for joint cooperation and partnerships.

DBWC received a multi-sectoral delegation of more than 22 companies from Guadalajara, Mexico headed by HE Laura Romero, Vice President of International Business of the Guadalajara Chamber of Commerce from Mexico. The visit was part of their 7-day Study Mission to Dubai as their first approach to the market and learn about the business environment and opportunities for their companies. During the meeting, many futures and possible cooperation opportunities were discussed in the areas of entrepreneurship, women's empowerment and economic partnerships.

Another important delegation was the G100 Club whose main aim was to expand its network of relationships and provide enhanced policies and practices. During its visit to the DBWC, it discussed the good governance and best practices implemented in the city of Dubai.

The delegation’s visit was part of its 100 meetings and consultations with stakeholders in multilateral institutions such as the UN, EU, GCC as well as Corporates, Business Leaders, Universities and Civil Society. The delegation was headed by its Founder and President, Dr. Harbeen Arora and was attended by six other eminent global businesswomen who are all part of the club. The G100 Club has a huge empowered network of 250,000 women entrepreneurs across 150 countries, fostering community networks for policy recommendations, advocacy, influence and actions toward a gender-equal future in this decade.

Finally, the expertise of Dubai's entrepreneurs and business women was shared with EMBA delegates from France. The meeting was about the delegation’s interest in learning more about the work of the DBWC, and the Board’s overall perspective on the progression of the business women landscape in Dubai.

All of these relationships and networks were employed to benefit Council members, increase their competitiveness in their respective industries, and open up extensive partnership prospects with other visiting delegations. – TradeArabia News Service