Most UAE private sector firms to switch to new weekend 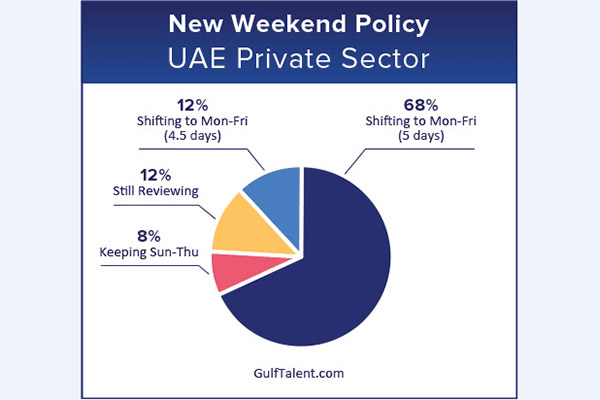 A majority of the UAE private sector companies plan to shift immediately to the new Monday-to-Friday working week adopted by the UAE government, according to the latest survey conducted by GulfTalent, a leading recruitment firm in the region.

The research, which was conducted between 27-29 December, asked top management of local and multinational companies in the UAE about their plans regarding their working week.
Overall 80% of respondents reported planning to follow the public sector in shifting to a Monday-to-Friday week from the start of January 2022. This consisted of 68% who will work five full working days, and 12% who are adopting a four-and-a-half day working week, with Friday being a half-day.

By contrast, only 8% of companies mentioned that they had decided to maintain their current Sunday-to-Thursday week. The remaining 12% reported being undecided and still reviewing their decision.

For those yet to decide, the main uncertainty was not knowing what their clients and stakeholders were planning to do. The general manager of a trading company who remained undecided, told GulfTalent: “We are still reviewing the situation, as we deal with a very big network of retailers, dealers, spare part shops and many other end users. We need to make sure that we will be able to serve them all.”

Among companies shifting to half-day Fridays, many reported extending other working days to maintain total duration of the working week.

When asked about any business or logistical challenges the implementation of the change posed, the most common issue raised was the ability to serve GCC-based clients, as they remain on a Sunday-to-Thursday schedule. To address this, some companies reported introducing a Sunday rotation for sales staff or having them work from home on Sundays, in order to maintain 5-day coverage for GCC clients, particularly Saudi Arabia which is a key market for many UAE-based firms.

Many respondents saw the regional disparity as likely to be temporary, expecting Saudi Arabia and other GCC countries to follow the UAE’s lead in changing their weekends. The previous GCC-wide weekend change from Thursday-Friday to Friday-Saturday took a decade to be fully adopted across the region. First announced by Qatar in 2003, it was followed by the UAE and Bahrain in 2006, Kuwait in 2007 and Saudi Arabia and Oman in 2013.

Even among companies only dealing within the UAE market, some remain concerned about a possible inconsistency of the new working week between their various clients, potentially forcing them to work six days a week to protect their market share, at least until a new universally accepted working week emerged in the UAE.

A further challenge cited by many participants in the GulfTalent survey was the need to accommodate Friday prayers for Muslim employees. To address this, almost all respondents who plan full-day Fridays are introducing extended lunch breaks of up to 2 hours for their practicing Muslim employees to attend Friday prayers, with the extra hour being made up by the employees during the day.

On the other hand, companies maintaining the current Sunday-to-Thursday working week acknowledged the challenge and discomfort faced by their employees with children. With all UAE schools shifting to Monday-to-Friday classes, parents remaining on the old working weeks will have just one day per week overlap with their children.

Despite the implementation challenges, 55% of respondents saw the UAE weekend change as positive for their business, compared with just 8% who expected a negative effect, and 37% who believed it would have no significant business impact.

The main benefit cited was the alignment with Western markets. The UAE head of a corporate services firm that works closely with international clients said: “We were waiting for this for a long time. This aligns us with our counterparts all around the world and we will be able to accomplish more every week and work less on our weekends.”

Hospitality firms were particularly upbeat on the change, expecting the longer weekend practiced by the UAE public sector to lead to more consumer spending on dining and socializing, while most of their staff generally work based on rotations and are not affected by the weekend change.

Among businesses expecting a negative impact from the weekend change, most were in the construction sector which operate 6-day working weeks on sites, with Fridays being a day off. Many expressed concern that, until a new uniformly accepted on-site weekend day emerges, the divergence of practices between various contractors collaborating on site was likely to disrupt construction work and put timely completion of projects at risk.

Some construction firms reported agreeing with their partners to have Saturday as the new day off on site. This is in contrast to UAE banks, which also operate branches 6 days a week, but have universally adopted Sunday as the day they will be closed. – TradeArabia News Service