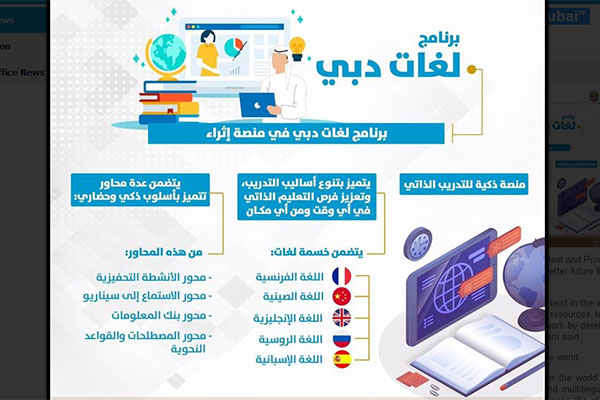 The General Directorate of Residency and Foreigners Affairs in Dubai (GDRFA Dubai) has launched the “Languages of Dubai" programme, the smartest learning platform of its kind in the UAE.

The programme aims to train and develop the English and other languages of the frontline employees in Dubai ports and their skills to deal with different situations with travellers in all Dubai ports.

The programme will focus on the various dialogues expected with passengers during entry and exit from Dubai airports, as the Dubai International Airport is the world’s busiest airports by international passenger traffic.

Major General Mohammed Ahmed Al Marri, director general of GDRFA Dubai said, “the Department works under the directives of His Highness Sheikh Mohammed bin Rashid Al Maktoum, Vice President and Prime Minister of the UAE and Ruler of Dubai, to achieve happiness and satisfaction of the people and ensure a better future for them so that the UAE will be among the happiest countries in the world by 2021. “

“The Languages of Dubai programme is part of the national agenda aims for the UAE to be among the best in the world in the Human Development Index and to be the happiest. The GDRFA Dubai is keen to prepare human resources to meet the needs of the work and keep pace with developments and rapid changes that occur in the areas of work by developing their skills, knowledge, and languages to facilities dealing with different nationalities in the country,” Al Marri said.

He pointed out that learning other languages is the key to learning the cultures and civilizations of the world.

Al Marri explained that the programme "Languages of Dubai” comes within the preparations for the world’s Greatest Show Expo 2020 Dubai, where the staff of the ports receives tens of millions of multinational and multilingual visitors, stressing that the Department is ready to receive visitors from all over the world in a manner that suits the status of the UAE.

Al Marri also stressed the need to achieve excellence in the skills of passport control officers and frontline employees in all ports, and their important role in leaving the first and last impression of the UAE in general and Dubai in particular.

Brigadier Awad Al Awaim, assistant director general of Human Resources and Finance Sector in the GDRFA Dubai, added that the Languages of Dubai programme is an addition to the “Ithraa Learning Platform”, which offers an opportunity for automatic self-training for employees throughout the year.

The training programme and the promotion of self-learning opportunities at any time and from any place, adding that the programme "Languages of Dubai" includes five languages French, Chinese, English, Russian and Spanish.

Al Awaim point out that the programme also includes several axes characterized by a smart way through teaching the principles of foreign languages and the way to respond quickly to the questions facing employees by travellers during their journey, and these axes are, the Activation, Listening, Vocabulary, Resource bank, and Grammar.

Lt. Col. Yasser Rashed Al Khanbouli, Director of Training and Performance Development in GDRFA Dubai, said that the department is continuously providing the best smart services through the adoption of training programmes in learning and acquiring international languages to learn about the cultures of the peoples of the world. – TradeArabia News Service