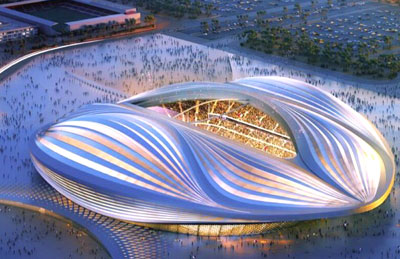 Qatar on Saturday unveiled the design for a new soccer stadium, inspired by a traditional fishing boat but with a cooled pitch, as it presses ahead with plans for the 2022 World Cup despite the dispute over when it can be held due to the heat.

AECOM, in association with Zaha Hadid Architects, has developed the new, innovative design under the guidance of the Qatar 2022 panel.

Soccer governing body FIFA has launched a consultation process to decide whether the tournament, initially scheduled to be held in the traditional June-July slot, when temperatures can reach around 50 degrees Celsius, should be moved to a cooler time such as November-December.

Under the blueprint released by Qatar’s 2022 Supreme Committee, the stadium in the al-Wakrah region, 15 km from the capital Doha, will have shaded spectator stands cooled between 24 and 28C and a natural grass pitch cooled to 26C.

Al Wakrah — famous for its fishing and seafaring heritage — is the proposed southern-most Host City for the 2022 FIFA World Cup, said the officials of the Supreme Committee.

The design of the stadium and the development of an 585,000 sq m precinct area surrounding it will embrace cultural heritage of Al Wakrah and adjacent historical settlement of Al Wukair, they added.

The design, topped with a structure resembling the sails of a dhow, also includes a spectator area outside the ground that will be temperature controlled at 30-32C.

The plan gave no specific details how the cooling system would work, other than saying it would incorporate “shading, aerodynamic and mechanical cooling components”.

The question of the heat during a summer tournament has been one of several controversies since Qatar was announced as the winner of the bid in December 2010.

Players’ union FIFPro has said it will urge its members not to take part if it is played in Qatar’s summer, even if air conditioning is installed in the stadiums.

Qatar has also been hit by allegations of migrant construction workers not being given enough food or water, as well as accusations of corruption over the voting procedure to win the bid. Officials have denied the accusations.

Speaking at the unveiling, Hassan Al Thawadi, the secretary general of Qatar 2022 Supreme Committee, said: "Today’s announcement constitutes the first in an upcoming series of progress-related events and initiatives as we enter the early phase of delivering the promises we made to FIFA and the international football community during the bid."

"We are proud to reveal what we believe is a truly unique stadium design and surrounding precinct that will serve the population and act as a social hub for the community of Al Wakrah, and Qatar as a whole, during the 2022 FIFA World Cup and for the years to follow," he noted.

"The stadium reflects what our country stands for from a cultural perspective. It is modern, futuristic and functional. But importantly, it remains true to Qatari heritage with the design and materials inspired by the traditional dhow boat," stated Al Thawadi.

“Al-Wakrah is the first of six stadiums already in the latter stages of the design process, our committee has issued 10 major tenders to the market encompassing project and design managers and stadium-operation consultants,” he told reporters.

Al Thawadi said the stadium, with a capacity of 40,000 people, would be completed by 2018, but declined to comment on the cost.

Overall, the country plans to spend about $140 billion on a rail system, a new airport, a seaport, and hundreds of kilometers of new roads for the tournament, in addition to the stadiums that will host the matches.

Asked how the committee plans to limit any risk of abuse to workers, al-Thawadi said the committee was dedicated to applying all clauses in its workers’ charter to make sure the rights of the workers were going to be respected and upheld.

“If there are any deaths above zero that would be unacceptable for us,” he said.

Key features of the new Al Wakrah Stadium and Precinct:

•The stadium would be able to host Group, Round of 16 and Quarterfinal matches during the 2022 FIFA World Cup.

•Spectators will be accommodated within a temperature-controlled (30 to 32 degrees Celsius) public realm covering approximately 72,000 sq m

•Using a holistic design – incorporating shading, aerodynamic and mechanical cooling components – players and spectators will be kept cool and comfortable with a natural grass pitch cooled to an optimal 26 degrees Celsius and shaded spectator stands cooled to between 24 and 28 degrees Celsius

•In order to meet the carbon neutral objective of the 2022 FIFA World Cup in Qatar, the Al Wakrah Stadium design:

•It will supply 15 per cent of tournament energy using on-site renewable sources
•It will reduce water use by 60 per cent
•It will use 15 per cent reused or recycled material in permanent structures
•It will minimize waste by 90 per cent through design efficiency and construction waste management
•Al Wakrah Stadium will receive Global Sustainability Assessment System (GSAS) 4 Star and LEED Gold certifications
•The newly-built Al Wakrah Stadium will serve as the future home of Al Wakrah Sports Club
•Stadium Net Capacity: 40,000 with 20,000 modular seats

•The new Metro station in Al Wakrah, on the Red Line, located 4 km from the stadium, with trains travelling every 10 minutes to Doha at an 800-passenger capacity per train
•A transit fan zone adjacent to the Metro station will allow fans to transfer onto stadium shuttle buses
•Water taxis at the port of Al Wakrah will connect seafaring fans to Doha and other cities across Qatar
•Over 100,000 sq. m. of roads, foot and cycle paths inside the precinct
•No. of parking spaces:  6,000

In 2014, tenders will be issued for early works, enabling works and main contractors for five stadiums. These stadia will be in different construction stages by the fourth quarter, said Al Thawadi.

On Al Wakrah specifically, early works on the stadium site will begin in January, with the tender for the main contractor issued in the second quarter.  Stadium construction will begin in the fourth quarter.

All construction contracts for the stadium will be issued in line with the Committee’s Workers’ Charter and Standards – developed in consultation with international human rights organizations – which will enforce best practice, in line with the government’s vision for worker welfare, and cement the tournament as a catalyst to the improvement of workers’ welfare within Qatar and the region.

AECOM chairman and CEO John M. Dionisio said: "We are pleased to play a part in the global launch for the Al Wakrah Stadium Project and we congratulate the Qatar 2022 Supreme Committee on reaching this important milestone in its delivery programme. We believe the planning and design for the Al Wakrah Stadium and Precinct clearly establishes an international benchmark for sports venues in the region."

AECOM is a global provider of professional technical and management support services to a broad range of markets, including transportation, facilities, environmental, energy, water and government.

"We are delighted to be involved with the 2022 FIFA World Cup programme and to support the Qatar 2022 Supreme Committee in reaching its vision. This is an exciting time for Qatar, and our global team of forward-thinking sports experts is well equipped to take on the innovative challenges that a project of this calibre will demand," stated Dionisio.

Dame Zaha Hadid said: "We are excited to be working on Al Wakrah Stadium. The design expresses its context, establishing a relationship with the city and its surrounding landscape."-Reuters and TradeArabia News Service