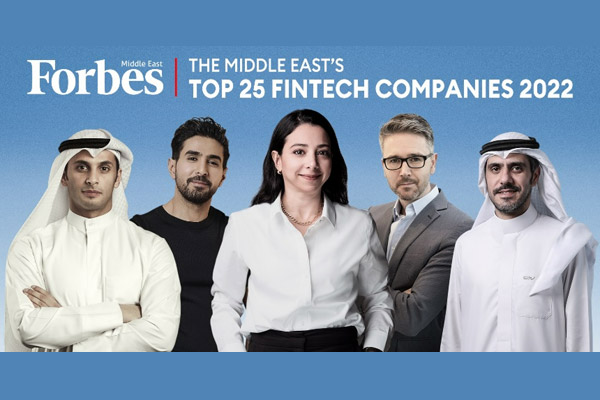 Forbes Middle East has unveiled the “Middle East’s Top 25 Fintech Companies for 2022’, highlighting the innovators in financial services that are helping businesses go digital and aiding consumers in the way they make payments and move money.

The list was constructed based on the amount of money executed through the companies’ digital channels in 2021, the number of downloads and active users each has, their geographical presence, annual growth, innovation, impact, and funding from venture capitalists.

The list is presented in a chronological order; it is not a ranking. Fintech operations owned by exchange houses, traditional banks, governments, and telecom firms were excluded.

Payment firms were the most represented on the list. Jordan’s MadfooatCom is one of the top performers after processing over $13 billion in transactions in 2021. Egypt’s Fawry, Saudi’s PayTabs, and Kuwait’s MyFatoorah are also revolutionizing the sector on their home turf. Four buy-now-pay-later make the list: Saudi’s Tamara, Egypt’s ValU, and the UAE’s tabby and Postpay.

Of the 25 entries, 13 companies were founded by a single entrepreneur and 12 were established by two or more founders. The UAE, Saudi Arabia, and Egypt comprise over 70% of the list. The UAE dominates with eight entries, followed by Saudi and Egypt with five entries each.

Kuwait, Bahrain and Jordan accounted for 3, 2 and 1 fintech(s) respectively in the list. – TradeArabia News Service