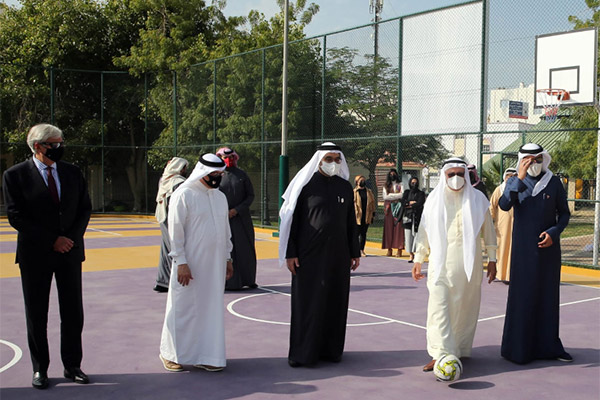 The inauguration featured a ribbon cutting ceremony officiated by Farouk Yousuf Khalil Almoayyed, Chairman of NBB, and Dr Abdulrahman Sadiq Askar, Chief Executive Officer of the General Sports Authority, with Members of Parliament (MP) Ahmed Saloom, and Hamad Al-Kooheji, amongst other officials from NBB and the Ministry of Youth and Sports Affairs in attendance.

Farouk Yousuf Khalil Almoayyed, Chairman of NBB, said: “The Bank continues to support the initiatives of Shaikh Nasser Bin Hamad Al Khalifa, Representative of His Majesty The King for Humanitarian Work And Youth Affairs. This initiative aligns with and reaffirms the Bank’s ongoing efforts and responsibility towards the Bahraini community, as it provides a safe space for our young generations and supports the Youth and Sports sector.”

Almoayyed expressed his appreciation towards Ayman Bin Tawfiq Almoayyad, Minister of Youth and Sports Affairs, as well as all parties involved, for their cooperation and efforts towards the inauguration of these playgrounds, which will become ideal meeting venues for the Kingdom’s youth to practice their favourite sports.

Dr Abdulrahman Sadiq Askar, Chief Executive Officer of the General Sports Authority, stated: “The establishment of Al Furjan Playgrounds demonstrates HH Shaikh Nasser Bin Hamad AlKhalifa’s keen interest in making recreational playgrounds available in cities and villages throughout the Kingdom, as they offer a safe space for our youth and contribute to developing their talents.

“Additionally, the General Sports Authority, presided by HH Shaikh Khalid bin Hamad Al Khalifa, First Deputy Chairman of the Supreme Council for Youth and Sports, President of the General Sports Authority and President of Bahrain Olympic Committee, is adamant on supporting this initiative, as it aligns with its strategy of uplifting the sports sector.”

Dr Askar praised Ayman Bin Tawfiq Almoayyad’s role in furthering the Al Furjan Playgrounds initiative to achieve the goals it was set out to accomplish, and Farouk AlMoayyed’s role, highlighting NBB’s contribution towards the establishment of the playgrounds.

MP Ahmed Saloom commended the two parties, as he highlighted what the initiative offers in terms of suitable space for youth to develop their athletic skills and talents. Additionally, MP Hamad Al-Kooheji acknowledged the positive outcomes of this initiative, as it allows Bahrain’s youth to use their free time wisely and discover their capabilities. - TradeArabia News Service