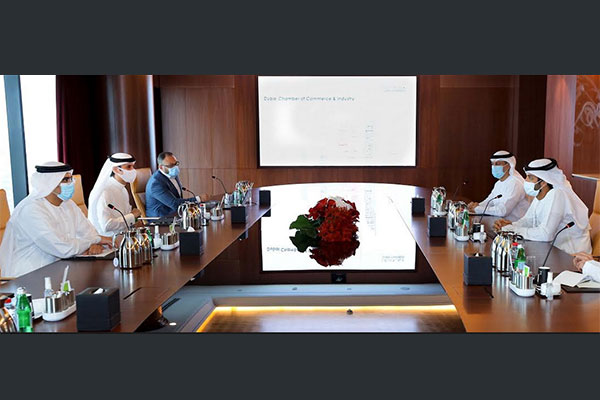 A recent meeting between the UAE Ministry of Economy and Dubai Chamber has highlighted the importance of the partnership between the public and private sectors, describing it as a pillar for the country's economic plans.

The meeting, which was held at the Dubai Chamber, was aimed at ensuring consensus among business councils and private sector representatives on the UAE's economic visions, reported state-run news agency Wam.

During the meeting, Abdullah bin Touq Al Marri, Minister of Economy, said that the UAE, since its inception, has believed in the importance of integrating roles between the government and the business community, and had succeeded in developing an integrated relationship, based upon mutual trust between the two groups.

Those at the meeting reviewed future economic trends and clarified the purpose of economic stimulus packages. Furthermore, the general framework of 33 initiatives adopted by the government were reviewed, followed by a discussion on how both sectors can complement each other’s roles to achieve the country’s economic vision.

Regarding the collaboration, Al Marri said: "The UAE’s business environment enjoys many competitive advantages, most notably the efficiency of companies operating in the private sector and their ability to adapt to changes, develop work mechanisms and overcome economic challenges."

Dr Ahmad Belhoul Al Falasi, Minister of State for Entrepreneurship and SMEs, said that building a resilient, diversified and sustainable economy is the main focus in the next stage, and all government efforts are being concerted to achieve it by meeting a number of immediate priorities. It supports a partnership with the private sector and the development of a supportive, dynamic and innovative environment for entrepreneurs in the country. This is most needed to stimulate economic activity and create new opportunities and further diversify the economic base, he added.

Dr Thani bin Ahmed Al Zeyoudi, Minister of State for Foreign Trade, said that one of the strengths of the country's economy is the presence of effective institutions to represent the private sector that greatly contributes to creating harmony and integration between the visions and requirements of the public and private sectors, by involving the business community in decision-making regarding the development of the economic climate.

He further emphasised that the next phase aims to provide bigger opportunities for the private sector to enter development projects, with priority given to projects that serve the country’s digital transformation efforts in various sectors.

Majid Saif Al Ghurair, Chairman of the Dubai Chamber, called for intensified collaboration between the public and private sectors to continue driving growth and economic development.

Hamad Buamim, President and CEO of the Dubai Chamber of Commerce and Industry, said: "Our collaboration has enabled businesses to play a bigger role in the implementation of the UAE’s strategic economic plans and distinguishing Dubai as a world-leading business destination."

The Dubai Chamber plays a fundamental role in representing, supporting and protecting the interests of the business community in Dubai by supporting the growth of business, creating a stimulating environment for it and promoting Dubai as a global trade centre. The number of Dubai Chamber members has reached more than 245,000 companies.