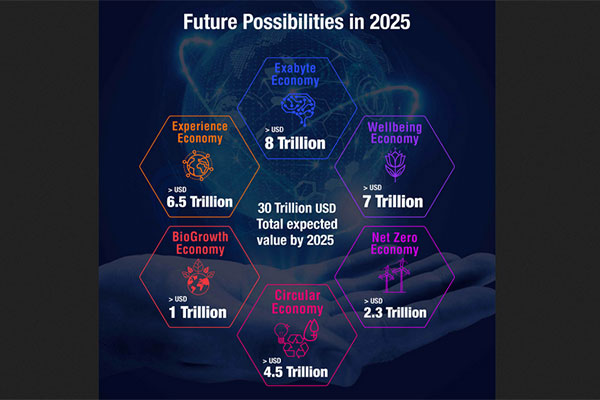 The UAE Government and the United Nations Initiative to commemorate its 75th anniversary launched the "Future Possibilities Report 2020", presenting six transformational trends that can add up to $30 trillion to the global economy by 2025.

The report, commissioned by the UAE, was launched during a global dialogue on "Opportunities for the Future We Want", co-hosted by UAE Government and the"UN75: 2020 and Beyond" Initiative, reported Emirates News Agency Wam.

Led by Ohood bint Khalfan Al Roumi, the UAE Minister of State for Government Development and The Future and Fabrizio Hochschild, United Nations Under-Secretary-General and Special Adviser on UN75, and moderated by Ambassador Lana Zaki Nusseibeh, UAE's Permanent Representative to the United Nations in New York, the dialogue focused on global approaches to strengthening future-readiness. This event is part of the UN75 Initiative ahead of the UN General Assembly’s annual meeting in September, which will commemorate the 75th Anniversary of the United Nations.

The meeting also hosted ministers, ambassadors, and officials from over 100 governments worldwide, in addition to more than 130 international experts.

Al Roumi said: "The UAE is committed to enhancing global partnerships to shape future development and promote governments’ readiness in cooperation with the United Nations. This embodies the vision of the UAE’s leadership to be proactive and innovate business models across various sectors to better anticipate future risks and secure a more resilient and prosperous future for coming generations."

"The report marks a major step towards fostering global dialogue as the COVID-19 pandemic continues to push the international community to accelerate adaptable policies and programmes in various sectors," she added.

Hochschild said: "The UAE is a country that thinks more of the future than many others. We are pleased to partner with the UAE in launching this report which identifies key opportunities for the global community to enhance solidarity and collaboration to accelerate Sustainable Development Goals, SDGs, as we shape our future."

Permanent Representatives of Egypt and China to the UN also participated in the interactive segment.

The six future transformational trends that define the features of a pioneering development in "Future Possibilities Report 2020", is available now on the UN website. Exabyte Economy The first trend focuses on development possibilities, namely "Exabyte Economy (Big Data): Hyperconnected Devices, Data and People", with an estimated total economic value of up to $8 trillion by 2025.

The second trend focuses on "Circular Economy: Waste not, want not", as increasing public awareness to reduce the impact on the environment will continue to open new possibilities across value chains based on optimising usage of resources and reducing waste. This will open new market possibilities totalling up to $4.5 trillion.

The third trend "Wellbeing Economy: More than Health" presents future possibilities emerging from increasing interest in physical and mental wellbeing by adopting new approaches at all levels. The combined value could reach $7 trillion within a few years.

The fourth trend examines societies’ interest in providing personalised experience services tailored to the needs of customers within "Experience Economy: From Ownership to Usership". New trends could build an experience-driven economy worth up to $6.5 trillion by 2025.

The fifth trend "Net Zero Economy: Scalable Low-carbon Solutions", explores the general increase in energy demand and global efforts to reduce carbon emissions. According to the report, it is expected that the growing demand for renewable energy could yield over $2.3 trillion of possibilities by 2025.

The sixth trend "BioGrowth Economy: New Agriculture and BIOmaterials", promotes new possibilities for various sectors worldwide relating to agriculture and emerging biological materials that could be worth over $1 trillion by 2025.