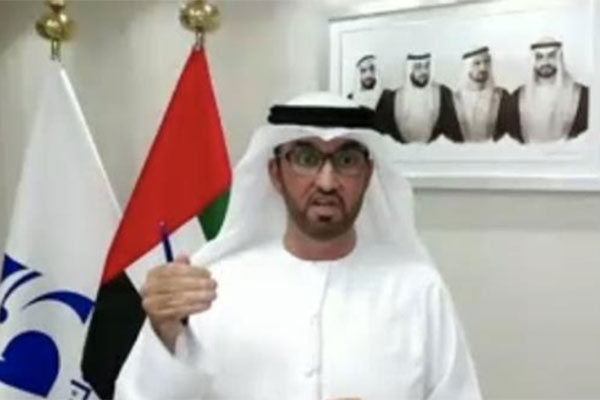 The World Government Summit recently addressed regional and global investment dynamics in the “new normal” of the post COVID-19 world.

Al Jaber spoke about a new idea by Adnoc which announced on June 23 that it has entered into an agreement with some of the world’s leading infrastructure investors and operators, sovereign wealth and pension funds and global partners – a $20 billion energy infrastructure deal.

Asked why the deal was done at this particular juncture, Dr. Al Jaber said: “I think the answer to your question boils down to the fact that the UAE has created a safe, reliable, and stable business environment. And that is of course underpinned by a robust regulatory framework and supported with a fully equipped business unique partnership model. Getting a transaction of this size and this complexity over the line in such a tough economic climate, with a very complicated business environment like the one we are all going through right now and the one that you're actually all experiencing, only demonstrates the continued confidence of the global investment community in the UAE as a highly trusted, go-to investment destination.

“This $20 billion deal, announced only this past Tuesday, highlights the world class nature of the UAE’s energy assets and infrastructure base, and their low risk and stable income-generating profile. And this is just the latest example of Adnoc’S and the UAE’s ability to attract top-tier investment institutions to the UAE. And we are very keen and, in fact, excited about many opportunities that will go on stream in the very near future.”

Laurence Douglas Fink spoke about the reaction by equities markets to the massive stimulus announced by governments around the world: “There are two major curves that are addressing the markets - the first curve is the policy curve by governments. We have never seen policy reactions, both fiscal and monetary policy by most governments including Germany and the UK, obviously the US, and so these policy responses are enormous. They have stabilized a) major corporations and b) small corporations has access to the capital. And so we've seen a dramatic stabilization in markets. And we are still sitting in giant pools of liquidity, even with all this. And so that is one of the big reasons why we had this, we've had this enormous bounce back from the lows of March 21.

“The second curve is now what is the dressing, how effective the policy responses are and that's the disease curve. And I think, psychologically though, the world has changed in the last few months, and the world has changed from a compassionate world to more of a pragmatic world. “And right now we are seeing rising infection rates, the market hasn't had a mild setback the last few days, but that is pragmatism that is part of the psychology of the world today. It is very apparent to me that the world is accepting higher diseases, higher infection rates.

“Obviously we know more about it, we know that young people mostly have very low complications. And so we're trying to navigate this; we've decided compassionate societies are actually too expensive. And I think every democracy right now is trying to navigate this compassionate versus pragmatic, and we'll see in the next two to five weeks is pragmatism right or wrong, your rising infection rates in many places in the United States, in other parts of the world. Yesterday we had the highest infection rate in the world, and markets are still pretty stable. That could all change if people believe that the infection rate is going to translate into higher mortality. And then, does it unsettle democracies worldwide.

“And I think we don't know where this is going, but right now the marketplace is saying policy responses sufficient, they're going to be enormous they're going to be repeated if we have to if we have higher disease rate, and then the marketplace is assuming some form of anti-viral that will minimize the impact of the disease, and possibly maybe a year from now we'll have a vaccination.

“I think the market is probably a little ahead of itself. At this time they still believe we are witnessing real tragedies in the small and medium businesses. And if we have to go back to a more compassionate society, they have to do more lockdowns then I believe it's going to require larger fiscal stimulus, which has all its attendant problems in the future. So these two curves that we have to watch - policy curves and disease and that will be now been determined over the next four to eight weeks as to what curve is more effective.”

On the oil markets outlook, Dr. Al Jaber said: “It all depends on how resilient you are and how able are you to manage or manoeuvre through these market dynamics. But in my view, I don't think anyone today is in a position, especially at this point in time, to tell you exactly what a recovery would look like or how this could potentially unfold in the very near future. No one can predict to the impact of a potential second wave of the virus.

“Having said that, there are some encouraging signs of increased activity in Asia, we're seeing it in Europe, and of course in North America. And this is simply happening because of the national economies starting to reopen again. And one of the key indicators we monitor very closely is country by country PMIs, I mean here, the Purchasing Managers Index. Some actually are inching above the crucial 50 mark for the first time since COVID started, and they are pointing towards economic expansion, once again, and that is also being reflected in the oil markets, which have clearly tightened in the very recent weeks. If you look back, where we were just two or two and a half months ago, oil markets are in a much healthier place today.

“In short, the consensus in the industry is that there is reason for cautious optimism and positivity. There is a reason for positivity. And that is, for example the recent OPEC+  agreement, together with a robust demand, helping rebalance the market. All these are good science, and good reasons for the industry to be optimistic and positive about the future.”

Asked about this positivity and his greatest concern right now, Laurence Douglas Fink, said:“We, COVID is probably the number one thing affecting the vitality of the economy worldwide. If we don’t have effective science of reducing the severity of the disease, it is going to change behaviours for a long time.

“You know, large components of the population are at risk continuously with COVID, men and women over 60, even younger people with some form of complications. It does change your habits. I also do believe there are some silver linings through COVID. We are finding that we're able to work remotely and many companies are able to work remotely really effectively now .. I do believe most companies will never go back to 100% at work. I do believe most companies are going to find ways of rotating their staff and moving them around and I think we don't have to see the clusters and cities as much as we used to. And so they're good and bad things related to COVID but unquestionably the disease curve is going to be the most important issue that's going to overwhelm every other issue going forward.

“If there is a second wave and we don't have those antivirals effective or we don't have a vaccination it's going to just be another form of retrenchment economically.

“What's remarkable today is there are more human beings been affected by the disease today than it was on March 21, when markets were 40% lower. That just tells you the psychological transformation, people do want to go out. .. However, we have to be safe, thoughtful, but let's be clear. That is not a solution to a robust economy and let me just add one last thing I speak to many many business leaders in the world.

“The most important question I asked everybody do you believe earnings are going to be in 2021, at least as good as 2019, and only a fraction of business leaders believe their business will be as robust as it was in 2019, but the marketplace is that saying that, I'll leave it at that.”

The World Government Summit organization is the primary global forum dedicated to shaping the future of governments worldwide. It takes place in February of every year in Dubai, UAE, bringing together prominent leaders from the public and private sectors, as well as scientists, authors, and entrepreneurs to engage in future-focused dialogues.

The Summit showcases the latest innovations and best policies worldwide, with the goal of helping the next generation of governments harness technology and prepare for the rapidly changing political and economic landscapes, ultimately improving the lives of citizens across the world. – TradeArabia News Service