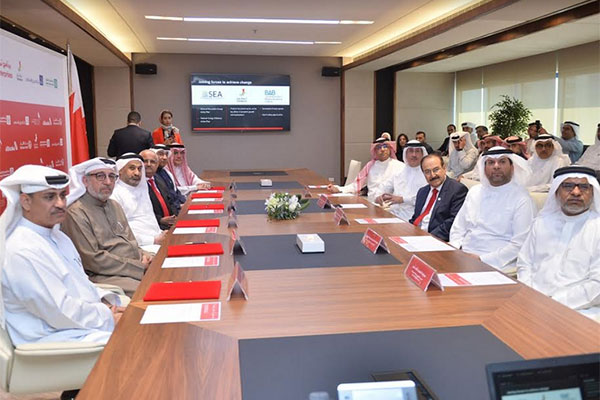 Tamkeen, Bahrain’s labour fund, has signed a partnership with several leading banks with plans to launch the Solar Financing Scheme to empower enterprises and enable them to purchase solar energy panels to generate energy.

The partnership comes as part of Tamkeen’s strategic efforts emphasizing the impact of its Tamweel scheme as it encourages the transformation to renewable energy while reducing energy expenditures.

Shaikh Mohammed bin Essa Al-Khalifa, chairman of Tamkeen, said: “This step is aligned with Bahrain’s Economic Vision 2030 and the Kingdom’s Sustainable Development Goals. This support is going to encourage enterprises to use renewable and clean energy, which will help them reduce their costs, allowing them to focus on expansion.”

During the signing ceremony the chief executive of Tamkeen Dr Ebrahim Mohammed Janahi pointed out the importance of this step, describing it as a strategic one that will bring Bahrain closer towards achieving its Sustainable Development Goals and promoting positioning it as a leading nation within the region.

He added that this support will create more opportunities in the field of renewable energy, and it will also help in reducing costs, allowing enterprises to shift their focus on growth.

The scheme covers the costs of the solar energy panels and is compliant with the Islamic Sharia within a competitive rate since Tamkeen supports 70 per cent of the annual profit rate.

Dr Abdulhussain bin Ali Mirza, president of Sustainable Energy Authority, said that the agreement will contribute to achieving the national goals adopted by the government to reach 5 per cent of renewable energy from the total energy by 2025 and 6 per cent of improving energy efficiency.

Dr Waheed AlQasim, the CEO of Bahrain Association of Banks stated that this partnership brings together the private sector to collaborate and work on the Kingdom’s strategic goals, especially since it’s aligned with the bank’s direction towards promoting “Green Loans”, which are targeted towards environmentally friendly businesses, encouraging customers to make optimal use of natural resources.

“This initiative by Tamkeen to provide these kinds of loans could also help increase the number of banks that will provide support towards businesses with solar energy projects,” he added.

Abdulhakeem Al Khayyat, managing director & CEO of Kuwait Finance House, said that signing the agreement with Tamkeen seeks to provide new financial solutions to support SMEs, noting that this new Solar Financing Schemes was added to the list of programs offered in conjunction by KFH and Tamkeen in the Financing and Entrepreneurship sector in Bahrain.

“The scheme will be supporting innovative solutions that are using clean energy. This strategic partnership with Tamkeen is aligned with the government’s directions towards diversifying renewable energy sources and achieving the Sustainable Development goals which is part of the Kingdom’s Vision 2030,” Al Khayyat added.

Al Khayyat also stated that this partnership will open the doors for further collaboration between KFH and Tamkeen in the foreseeable future, adding that KFH will provide a variety of financing schemes for enterprises. – TradeArabia News Service