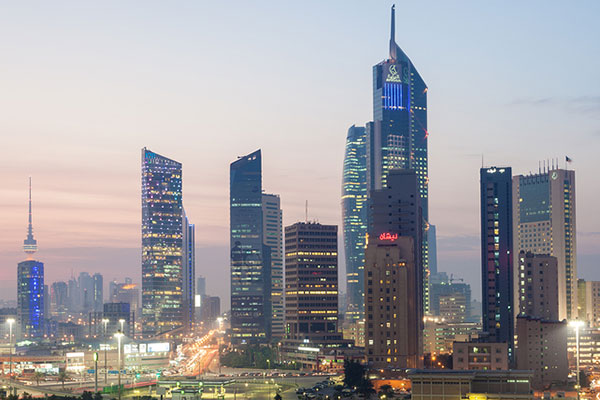 Kuwait’s nonoil growth strengthened in 2019, but lower oil prices and output are weighing on the oil sector, said the International Monetary Fund (IMF) at the end of an official staff visit to the country.

Nonoil growth was propelled by strong government and consumer spending, the latter on the back of a credit recovery. Oil output however is expected to contract by 1 percent, broadly in line with the OPEC+ agreement.

Taken together, this would bring overall growth to about 0.7 percent in 2019 from 1.2 percent in 2018. The current account surplus is estimated to have narrowed to 8½ percent of GDP in 2019 on account of lower oil exports. Inflation rose to 1.1 percent, reflecting higher food and transport prices and slower housing rent deflation.

It grew by almost 25 percent in dinar terms from FY2016/17 to FY2018/19, mostly in hard-to-reverse expenditure categories. The public wage bill has grown by about 6 percent annually (despite low inflation) over the same period, as the government was compelled to absorb new graduates into the already oversized public sector.

To make room for new labour force entrants, the retirement age for civil servants was lowered by 5 years, widening the state pension fund’s actuarial gap to about 45 percent of GDP, the IMF statement said.

The current conjuncture and the exhaustible nature of oil underscore the need to diversify the economy and ensure adequate savings for future generations. While large financial assets, low debt, and a sound banking sector underpin Kuwait’s resilience, the recent run-up in spending has worsened the fiscal position and eroded liquid buffers.

Without a course correction, the fiscal and financing challenges would intensify and the window of opportunity to proceed at a measured pace would narrow.

The Kuwaiti authorities have embarked on financial and structural reforms to boost private sector growth and employment of Kuwaitis. They are undertaking reforms to improve the business climate, strengthen competition, reduce the role of the state in the economy, deepen capital markets, and foster the development of small and medium enterprises.

The needed fiscal adjustment however is proving difficult due to opposition to reducing the public wage bill, subsidies, and transfers, or introducing new taxes. To build broad support, the adjustment should be: (i) designed in a growth-friendly and socially equitable manner; (ii) supplemented by reforms to cut waste, improve the quality of public services, and strengthen government accountability and transparency; and (iii) accompanied by a vigorous communication campaign. – TradeArabia News Service