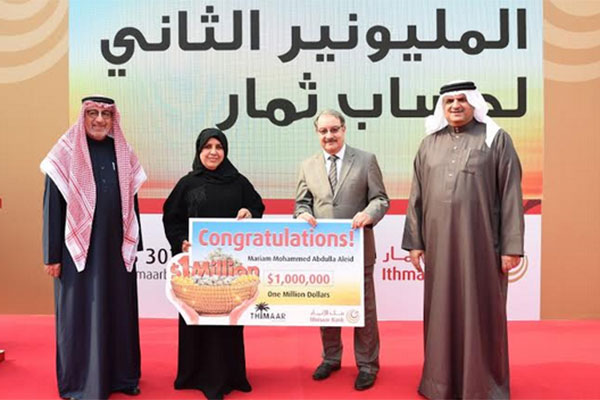 In attendance were other Thimaar winners as well as Ithmaar Bank general manager - Retail Banking Group, Mohammed Janahi, members of the Ithmaar Bank management team, and a large audience.

“On behalf of all of us at Ithmaar Bank, we congratulate Mariam and her family, and all the other Thimaar winners,” said Ahmed Abdul Rahim. “The Thimaar scheme, now in its tenth year, is not only designed to encourage responsible financial behaviour by making saving more rewarding, the prizes also have the potential to change lives.”

“At Ithmaar Bank, we remain committed to improving our services and rewarding our loyal customers. Whether the amount is large or small, keeping a little aside for the future is always a wise decision, and we also try to make saving easier for our younger customers through a special junior account.

“Ithmaar Bank offers the highest number of prizes of any similar scheme in Bahrain, providing additional incentives for savers. We look forward to offering more valuable prizes and announcing other winners later this year,” he added.

“Although I was trying hard to save for the future, I thought it would take years to reach my financial goals – but, thanks to saving in the Thimaar account, I am thrilled to be a millionaire,” said Al Eid. “It’s an amazing feeling and I’m very grateful to Ithmaar Bank.”

Along with cash prizes, the Thimaar account also offers a profit rate on the balance maintained. In July 2019, Dr Abdulhannan Abdul Hameed Darwish, a Bahraini father of six, pledged to donate $100,000 to charity after Ithmaar Bank named him the first ever Thimaar millionaire.

Thimaar loyalty draws offered additional prizes to customers who have not won a prize in the past two years. In 2019, Ithmaar Bank added an additional 50 prizes worth a total of $250,000. This was on top of the existing $660,000 Thimaar loyalty prize purse where 1,212 winners could win loyalty cash prizes throughout the year.

Every BD30 ($79) maintained as an average balance qualifies Thimaar account holders to enter the monthly draws. The more customers save, and the longer they maintain balances in multiples of BD30, the more opportunities they have to win. – TradeArabia News Service