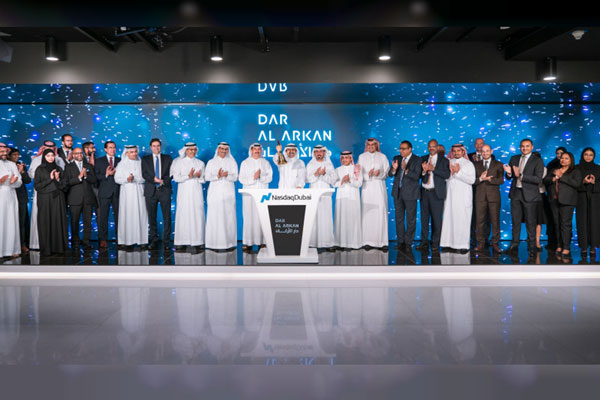 Saudi-based Dar Al Arkan, one of the leading real estate developers with a major presence in the Middle East region, on Wednesday listed a $600 million sukuk (Islamic bond) at Nasdaq Dubai.

The listing supports the accelerating development activities of Dar Al Arkan, one of the Middle East’s leading real estate developers, said a statement from Nasdaq Dubai.

The company's projects include flagship integrated residential communities across Saudi Arabia, as well as its ‘I Love Florence Tower’ in Downtown Dubai.

This issue was the Saudi group’s 10th since 2007 and the sixth tranche of its current $2 billion programme. The issue is for a five-year term due in February 2025 with a coupon rate of 6.75 per cent.

With this bond listing, it brings Dar Al Arkan’s total sukuk value listed on Nasdaq Dubai to $1.6 billion, following the listings of two sukuks of $500 million each in 2017 and 2018.

Commenting on the listing, Al Shalash said: "With over $1.5 billion of subscriptions, our latest sukuk issuance was very well received by the market. It is a testament to our strong relationship with the global debt capital markets and a big vote of confidence from investors in our stewardship of their capital."

"The funds raised provide us with the capital to dynamically invest in our business activities across Saudi Arabia as we see the market conditions improving and prepare for the next upcycle," stated the top official.

"As the region’s international exchange, Nasdaq Dubai provides our sukuk with high visibility to regional and international investors as well as an efficient listing platform regulated to international standards," he added.

MSCI, a leading provider of research-based indexes and analytics, added Dar Al Arkan to its Emerging Markets Index following Saudi Arabia’s inclusion in the index in May.

It was also one of 12 Saudi-listed companies on which Nasdaq Dubai launched futures contracts in January 2019.

Nasdaq Dubai chairman Abdul Wahed Al Fahim said: "We are delighted to deepen our relationship with one of the Middle East’s largest real estate developers and its diverse sukuk investors."

"This listing underlines the increasing success of Nasdaq Dubai’s strategy of attracting high quality issuers of sukuk across a wide range of industry sectors," he added.-TradeArabia News Service