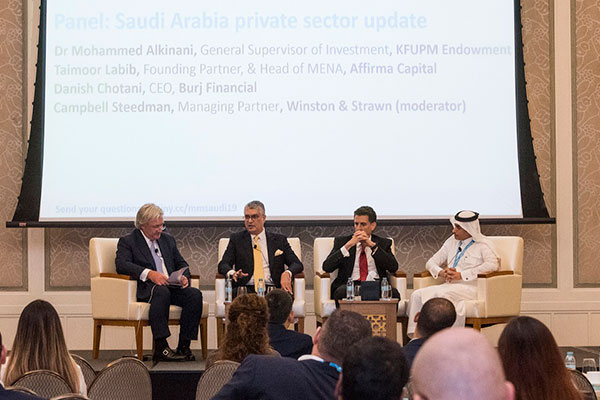 Saudi Arabia saw a jump in M&A volume and value with 14 deals worth $72.6 billion during the first half (H1) of 2019, due to the blockbuster $70 billion Sabic deal announced in Q1,the region’s highest value deal on record and the second largest industrials and chemicals deal globally, a report said.

The Saudi Arabian IPO market has seen limited activity in the last few years, however in H1, the country experienced IPOs worth $752 million spread across three offerings, its highest value since 2015, said Mergermarket, a leading provider of M&A data and intelligence, in its research report.

Patrick Harris, head of Energy and Natural Resources at Mergermarket and Deal reporter said: “Saudi Arabia remains the key market driving blockbuster M&A in the region. The behemoth majority acquisition of Sabic by Saudi Aramco, a shift away from upstream oil and gas, is indicative of how the Kingdom’s economic and social reforms have filtered through to the deal making and investment landscape.

“With a raft of slated privatisations, or part-privatisations, under review, a number of potential investment targets will likely come to market, whether through stake sales or IPOs, such as that planned for Saudi Aramco.”

The project finance sector in the country has also been active in the last 18 months, according to Mergermarket’s infrastructure focused sister brand Inframation, with big projects set to reach financial close in the country including two Independent Water Projects (IWP), a solar photovoltaic (PV) project and a wind farm.

The Saudi infrastructure pipeline looks strong, as the government plans to use PPPs and privatisations to achieve its Vision 2030 plan. The National Centre for Privatization (NCP) has a huge range of projects in the power, water, healthcare, road and rail sectors. Live transactions by the NCP currently include a PPP to build 60 schools, a radiology PPP, the King Faisal Specialist Hospital staff accommodation PPP and the King Faisal Specialist Hospital equipment management services PPP. Eight solar PV projects are also currently at the pre-qualified proponents stage.

Chris Haffenden, project lead, Project Finance at Acuris commented: “Foreign interest in Saudi projects has grown sharply, as the Kingdom seeks to finance ambitious infrastructure and privatisation programmes. Over 100 entities pre-qualified for the second renewable round.”

“There are over 100 initiatives, across 12 sectors, planned under the Vision 2030 programme. Six deals have already closed for $3.5 billion. The deal pipeline includes a number of water, waste and desalination projects, with pilots also due in healthcare and education.

“The Public Investment Fund (PIF) is developing a $500 billion giga-project, Neom, a futuristic smart city on the Red Sea Coast the size of Massachusetts. Advisors are already salivating over potential mandates,” he added.

Campbell Steedman, managing partner, Middle East at Winston & Strawn LLP, commented:“It has been a bumper year for deal-making and M&A activity in Saudi Arabia, reflecting  not only the better economic growth prospects within the kingdom and wider region, but also the rising investor confidence at boardroom level.

“Looking ahead, with the Saudi Aramco IPO on the horizon and a number of other important M&As in key industries in the pipeline, we expect this to encourage further IPO activity and fuel new investments and greater liquidity for the region as a whole, as companies look to drive more value through consolidation.”