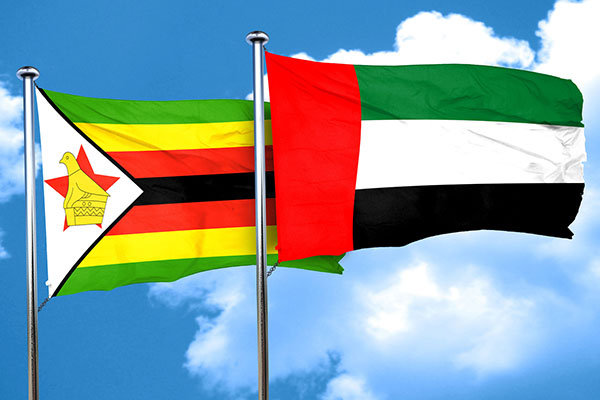 Bilateral relationship between the UAE and Zimbabwe will grow to be three times greater than that of today in the near future, said the UAE Ambassador to Zimbabwe, Mahash Saeed Salem Mahash Al Hameli.

The Ambassador was quoted while recently leading a high level delegation and participating at a handover ceremony of medical equipment donated to Zimbabwe’s Ministry of Health and Child Care at Harare Central Hospital.

Republic of Zimbabwe President Emmerson Mnangagwa, was on hand to host the event, commended the UAE in its initiative to not only donate over $2 million in equipment and medicines to Zimbabwe’s National Pharmaceuticals Company (NatPharm) but in also announcing the intent to establish a local pharmaceutical plant in Zimbabwe.

The investment, according to President Mnangagwa, will not only enable the Sub Saharan African nation to reach its goal of providing universal health coverage by 2030, as promised by his Administration, but alongside the UAE, will seek to fulfil an ongoing mission to return the former ‘breadbasket of Africa’ to prosperity.

“Health is a pre-requisite for socio-economic development," President Mnangagwa stated. "It is accordingly with great pleasure and honour that we receive hospital equipment from our partners, the United Arab Emirates. We express heartfelt gratitude for this timely, generous donation, one which will directly benefit our health care delivery system, which I have promised will be more efficient, wholly-integrated and of high-quality in the immediate term, leaving no one behind.”

“My country will continue to collaborate with the United Arab Emirates in addressing present technology gaps and expanding the pharmaceutical sector in order to promote a healthy nation,” he added.

Al Hameli suggested that the donation was in step with the UAE’s 2017-2021 Investment Strategy to engage as a leading global partner in Africa; a milestone for Zimbabwe, in what is a major, cross-sector investment, to address Zimbabwe's present challenges and opportunities. The UAE hopes this will play a key role in Zimbabwe’s ongoing development, he added.

“Our commitment to Zimbabwean investment is long-term, not only in the provision of aid, but in supporting the Zimbabwean economy, investing in trade opportunities, and working alongside Zimbabwean leadership to empower its communities," he stated.

The UAE is already one of Zimbabwe’s leading trading partners.  In 2017, Zimbabwe registered a trade surplus of $307.6 million with the UAE and has recently been inviting UAE companies to invest in sectors such as mining, information and communications technology (ICT), agriculture, tourism, education, renewable energy technologies, infrastructure development and healthcare.

Companies from the UAE are dispersed throughout the Zimbabwean economy, with Dubai serving as a leading destination for Zimbabwean citizens and businesses. Zimbabwe’s exports to the UAE have previously been underpinned by mineral resources, including gold, and diamonds. Zimbabwe is reported to have more than 13 million tons of gold reserves, one of the largest reserves of diamonds in the world and the world’s second-largest reserve of platinum, along with other mineral resources.

Al Hameli noted that he sees a tangible difference in the Presidential Administration of Emmerson Mnangagwa, holding great confidence in the relationship held between the two countries. He went on to forecast that in the immediate term, the UAE business community will bolster the efforts of true governance to oversee Zimbabwean investment.

“Zimbabwe is again working on behalf of its people - The international community and the Zimbabwean population should watch with patience as the developmental agenda of President Mnangagwa’s Administration bears fruit, delivering lasting change within the communities of the nation,” Al Hameli concluded. – TradeArabia News Service